Water Operations fall under the umbrella of the Special Operations Division. Under the Special Operations Division, Water operations is a multi-task team that responds to Swiftwater and Flood rescue, Ice rescue and Boat Ops. The Monarch Fire District has a total of 62 Swiftwater technicians and 22 Boat rescue Technicians. All personnel are trained in the Ice rescue as well. This need came to light during the Great Flood of 1993, in which the Missouri river levee broke, flooding the Chesterfield Valley. These technicians are strategically assigned to trucks for immediate response to the Swift and Flood water areas. An extensive equipment cache is maintained and countless hours of training are conducted yearly.

It only takes minutes if not seconds for a severe thunderstorm to drop large amounts of water and create a torrential and life-threatening flood.  And when we do get excessive amounts of rain, these events become evident on a larger scale, such as the “Great Flood of 1993!” that happened here in our own "valley".  In the Fire Service we refer to this as a "swiftwater rescue".  Although 65 of Monarch Fire Protection District's Paramedic/Firefighters have been trained in "Flood/Swiftwater Rescue", it is not always possible to deploy them in such events.  Many times it is just too dangerous to send anyone into the water, even if by boat, without adding more victims to the situation. With the existence of several high rise buildings within Chesterfield and the surrounding areas, and the plan for many more in the coming years, progress has challenged the Fire Service to be able to rescue victims trapped on upper floors due to fire or collapsed stairwells, without being able to access them from below (remember the World Trade Center).  This creates a situation where ladder trucks and high angle rope rescue techniques fall short.  It is not acceptable for us to "hope" that these people will survive until we can finally reach them with conventional methods of rescue. Realizing these weaknesses, the Monarch Fire Protection District had entered into an agreement several years ago with the St. Louis County Police Division of Air Support, to form an elite group of Helicopter Rescue Swimmers to form our Special Operations Air Rescue (SOAR) Team.  These individuals are highly trained in all aspects of rescue, both land and waterborne, from a helicopter platform.  This is a rescue team that is the only one of its kind in the mid-west region.  Instead of hoping for the best in situations that would limit other Departments abilities to act, we have in place, a solid, and well trained team, that can essentially respond to, and mitigate, "ANY" rescue request that would typically overwhelm even the most prepared Departments.

Monarch Fire District is one of the only two Heavy Rescue Squads in the St. Louis County. Rescue Squad 2216 provides a compliment of specialized personnel and tools to perform rescues involving the following: High angle, confined space, trench collapse, swift and flood water, ice, structure collapse, vehicle and machinery rescues. Pumper and ladders in the district have a condensed cash of this equipment and are trained in the utilization of this equipment. Rescue Squad 2216 has an extensive capability to perform these rescues. In addition to the Squad, Monarch is the home of Heavy Mover 2246. This is a Fifty five foot tractor trailer that has even more specialized equipment. It is the workhorse of the St. Louis area Strike Team 3. Strike Team 3 is the areas URBAN SEARCH and RESCUE team. The team is compiled of firefighters from all over the St. Louis County. Monarch has 45 members that are attached to this team. All team members have been certified in advance training and continue to maintain their skills. The Monarch Fire district Special Ops and Heavy Rescue teams are coordinated by Deputy Chief Robin Echele. 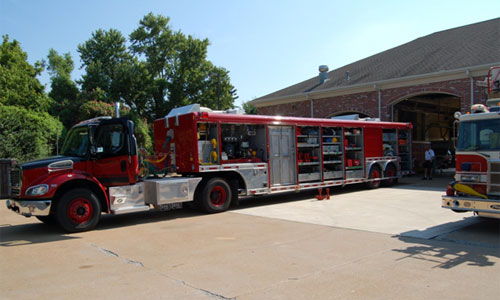 Monarch Fire Protection District is a modern day suburban fire district that is prepared to handle all hazards. This all hazard approach to emergencies is evident in that the fire district is a founding member and still active with the St. Louis County Hazardous Materials and Weapons of Mass Destruction team. The fire district currently has 15 active line duty personnel that are members of the team. These members are distributed throughout the district on all three shifts. Members on this team train every other month with personnel from other departments to prepare for a possible event that may have hazardous material involved. These members of the Monarch Fire Protection district do this above and beyond their regular duties as firefighters and paramedics.